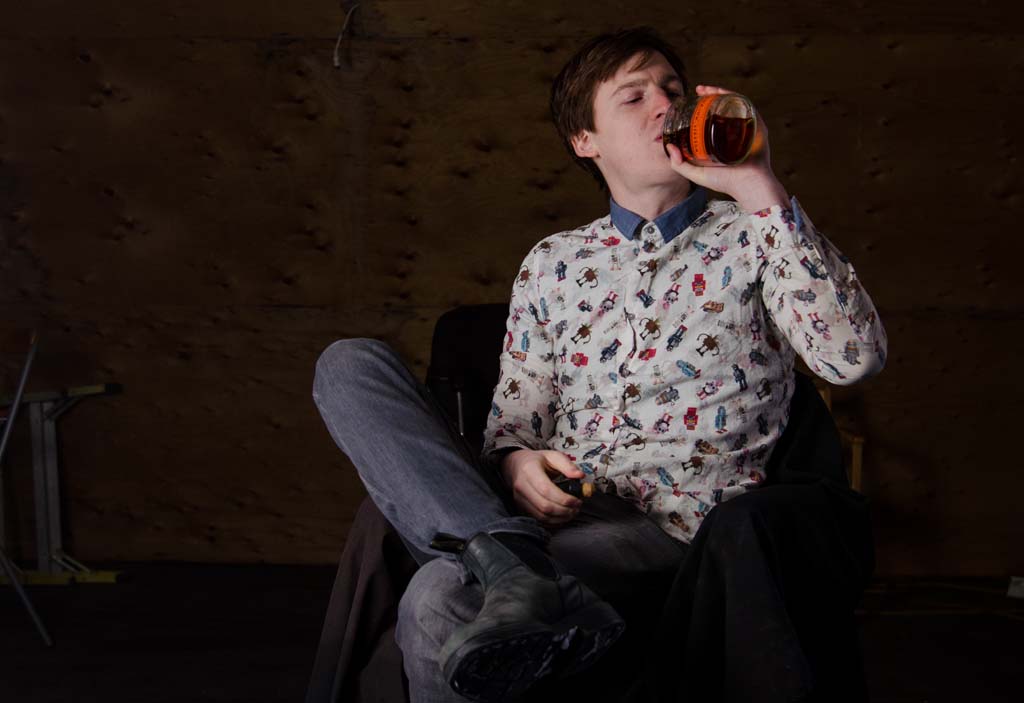 My name is Jimmy Thompson, and I wrote, directed and edited the film The Arctic Circle.

So the film is about a woman who is at a party – at a fire and she wakes up in the middle of the ice, in the middle nowhere and is trying to find a way back home but she finds her way back to the fire. Then she wakes up on the ice again and just it’s this loop that she can’t escape from. It’s kind of hopefully a not too heavy-handed way of talking about how our lives up here can seem like A) very oriented around partying and drinking and B) sort of a similar day-to-day.

I think being out on the ice road, we went out first in the morning after a party that I had had at my house, which is kind of ironic I guess. But I went to pick up my director photography and she was still wearing her party dress from the night before. We went out on the ice road and it was -40 that day and she just took it like a total badass. As well as our lead, who was like rolling around in the snow to make sure that she looked the same in every shot and at one point, Anita, our lead she wanted to like eat an icicle for a shot – it was her idea but she wanted to eat this icicle for a shot and then she ended up cutting her lip on it and so she’s like bleeding all over the place  and she did it like four times, and kept on doing it – I don’t know, she just wanted to honour the commitment I guess. To sacrifice the body for a shot.

I’m not sure. I think it went more smoothly than I had expected I think because we were willing to be flexible. The final film is very different from the script, and I think you can probably say that about almost every film in the film festival. Everyone’s different but most of that is due to either environmental or logistical constraints. So in our case, it was the opening scene of the fire – which we came back to several times. It was supposed to be at houseboat but there happened to be a fire happening so we just took avenge of that. We were gonna fake a house party on a houseboat and we thought you know there’s already party happening at this fire so let’s just do it there and that worked extremely well – we were so happy. The same with the filming on the ice – we had a lot of shots that we wanted to get that we didn’t get, and we had a lot of shots that we did get that we didn’t know we were going to get because at the time we were sort of just thinking on our feet.

I think the community. Living here in the wintertime is hilarious because it’s like a second question out of everyone’s mouth, like – what are you doing this weekend? How’s your Dead North film going? Everyone is doing one, almost everyone I know was involved in some way and if they weren’t, then they wanted to be and they were asking if I had any parts for them or they’re wishing that they can be around so they can do one next year or whatever. Everyone knows about it, everyone wants to be a part of it. It’s the thing in Yellowknife in January.

This is my second year participating, last year it just happened – I had written a script thinking I might submit it and I just really didn’t and then it ended up getting picked up by a different team that had their script fall through so I ended up working with them but just as a writer. I wasn’t entirely happy with how it turned out last year, and not because of the people that made it – they did an awesome job. I think that when I had written that I wrote it not having any idea how a film comes together, I never made anything like it before – I had written a few comedy shorts before and that was it. So trying to make something that’s a little more ambitious in terms of like a more complicated story was not a good idea. So this year I wanted to do it as bare-bones as possible – no dialogue, no complicating factors, not even multiple characters – there is one character, there is one line of dialogue and that’s the one that had to be in there – it was mandatory. Yeah, so what I wanted to do was a really simple one this year and see how that was and next year I think I would like to do something in between; one that’s not as simple and bare-bones is this one and not as stupidly complicated as the one last year.

It’s easy to say Armplant because that’s just such a weird and crazy film and he’s done it three years in a row, where he’s made these strange, strange movies but I don’t think that was my favourite in the end. I think my favourite was Arsenic Wars 2 – it was insanity, absolute insanity, it made no sense and I don’t think they were even going for something that made sense. I really respect that they just didn’t colour inside the lines and they essentially decided to make an action movie trailer and it worked, it was fun.

I was on the set of Red Snow last week, you know, a multi-million-dollar budget film and I was interviewing the producer and talking to the writer and it’s entirely possible that this film is up here, not because of Dead North, but because of the community around Dead North, or because of Pablo and Jay, because of the capacity that’s been built here. That’s really, really cool that the north is having feature films shot here because of these like five minute, no budget horror films and because people are starting to pay attention to film up here – that’s exciting.