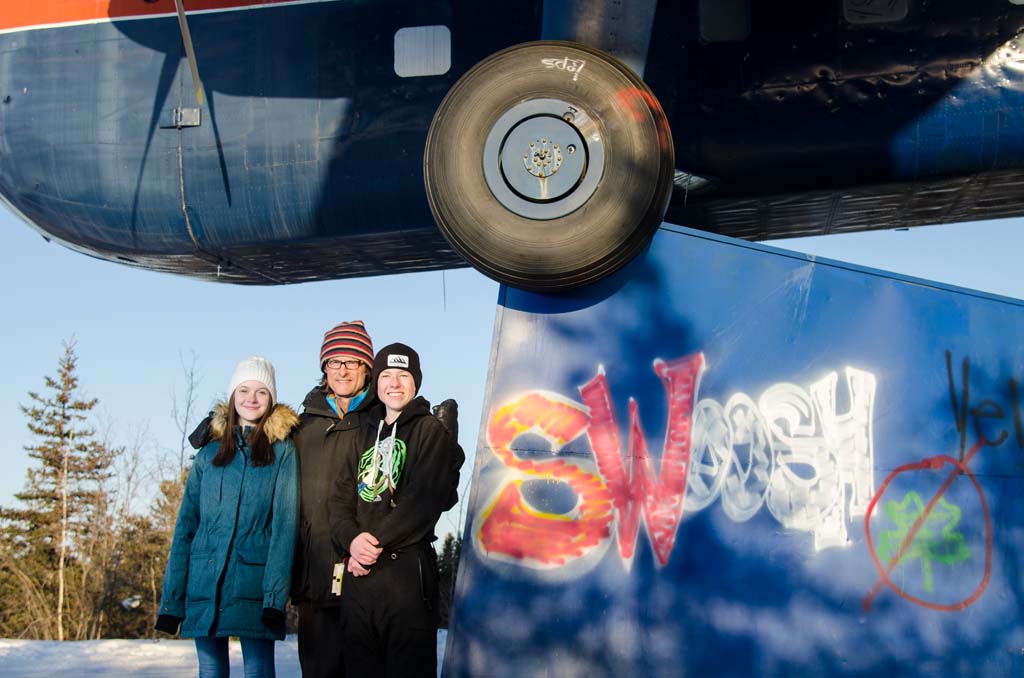 Michael: Michael Gannon, the film was Shred. I played the killer in Shred. I also wrote and co-produced and directed the film with Larry Innes, who is unfortunately not here, but this was our second film together, last year we did a different film, but that’s me.

Robert: I’m Robert Paddock, I’m 16 years old and I acted in the movie as Joey, the dead guy.

Michael: Everybody dies in the film except for me.

Michael: Well, truthfully I was doing a liftie training course at Bristol Pit, and it was about a month and a half before we needed to do a Dead North film and I thought, what a cool place to do a film. That’s where it started and Larry and I were with some friends a week or so later and we thought about it and next thing you know Larry sent me a draft script, I revised it and next thing you know we had a good script and here we are.

Raven: During filming there’s a scene where I answer the phone, and I thought it was a very interesting and funny scene to film because as I answered the phone all I heard was Robert singing. So it was quite an experience to get to play a terrified person while having the alphabet sung to me.

Robert: It’s probably mine too.

Michael: You should know the back-story, these two have acted together in musicals – hence the singing. My favourite memories are everything that went wrong, because everytime something goes wrong you have to adapt to it, so we were locked out of the pit one day and had to bring a tiger torch in to unfreeze the locks. Another time we were locked out of the building so we had to cancel that. We wanted to be able to control the lights, but we couldn’t control the lights so we had to change the story based on that. So it’s all the things that don’t work as you want them too, those are my memories.

Robert: I actually think mine was the fake blood that Larry made, and he’d squirt it on the snow and when we were done I’d go eat it.

Michael: There was some chocolate syrup in that.

Robert: Weather. The weather was insane, it was freezing. Really cold.

Robert: It was like -40 three days in a row. Also, the sunset, because it’s super early, so we had to get off school and rush here to get the perfect scene. Like some days we would film the same scene so we’d have to get here at the same time or it wouldn’t match up.

Raven: Horror is absolutely my favourite genre to watch, to read. I don’t know why, but I love the feeling of being terrified, but I still know that there’s no real danger.

Michael: For me, horror is a little bit like comedy – you see a horrific scene and you just have to laugh at some point because it’s just not real. Sci-fi is potentially real so it’s a very different experience.

Raven: I like how a whole bunch of different places come to Yellowknife to participate in it. It’s super crazy how there are so many talented people in just the North alone and there are people from Iceland coming up here, it’s amazing.

Robert: She said it all.

Michael: I want to say something funny about Pablo, but I can’t think of anything, so fit something in there about Pablo for me.

Michael: Last year, Larry, who edited, wrote, directed and produced this film with me, he actually put together this other film based on the stoppage of time. A little bit like Twilight Zone type film. He just asked if I wanted to act in that film and I said sure. I was the bad guy in that film too. It was a lot of fun.

Michael: I used to work in film years ago, I did a lot of film work. Once you get it in your blood, you sort of want to keep doing it again.

Raven: Michael called me to be in the movie and I said yes right away because acting is just what I love to do, I’ve always loved acting so I was like, “I get to be in a movie, acting, sweet, I’m in!’

Robert: Yeah, I like acting too. I was just drawn to the concept because I like snowboarding, so when he said it was a snowboarding movie I was like ‘Yeah.’

Michael: I have learned that talent makes a big difference, and specifically acting talent. We had good actors this year and it really showed through.

Raven: I learned how big it actually is, like I’d heard of it before and I knew that it was something the town of Yellowknife always participated in, but I never knew how big of a deal it actually was, and movies from here actually go one to like Cannes Film Festival in France and everything.

Raven: I thought they were all super amazing for a whole bunch of different reasons. The one that comes to mind is Bejede because I thought it was a super creative idea and it was acted well.

Robert: Bejede was really good, CariBOO! was really funny. I only went the one night, so I didn’t see as many as Raven did. Another one, the one the school put on, in one of the communities. I don’t remember the name.

Michael: Mine was definitely CariBOO! Pat Kane, I just laughed so much. I know all those guys, so seeing them in that film was super funny.

Raven: I think it’s super cool how everyone dresses up to go to the festival.

Michael: I just want to go kill some more.