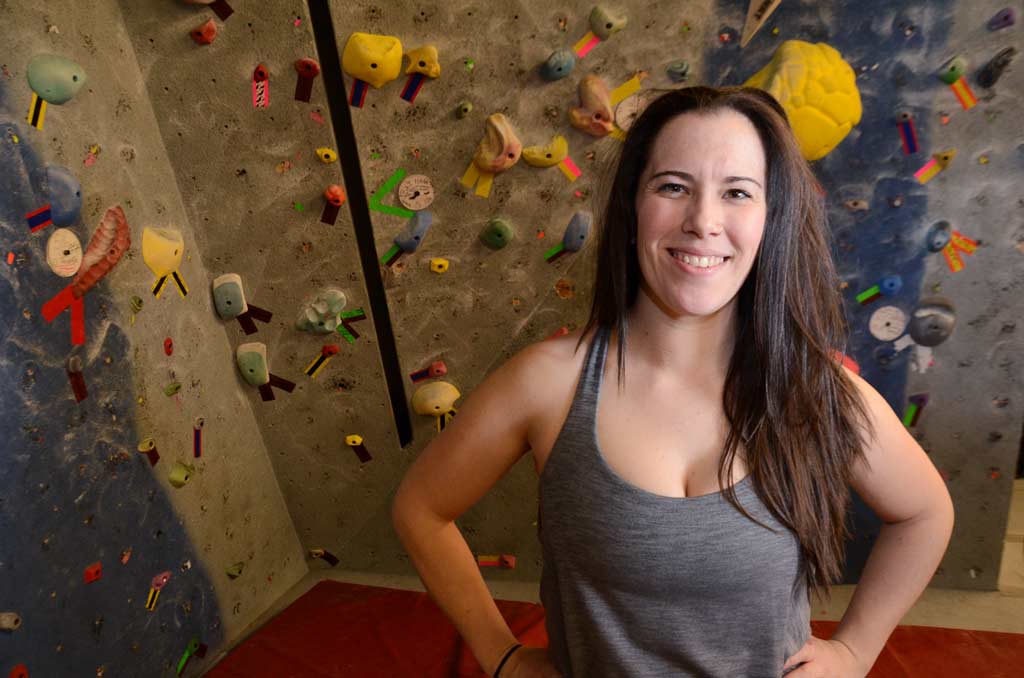 Robyn Scrutton is one of three women in Calgary whose every day job is riding her bike on the streets of downtown; in her spare time she’s a climbing instructor.

In 2008, Scrutton began climbing, she had been introduced to the sport after attending a general volunteer search and rescue meeting in Rocky Mountain House, thinking it would be a good way to give back to the community.

A team member from the mountain rescue team deemed Scrutton ‘young and fit’ and told her she would be going with them.

“I think it was the following Sunday when they had their practice that they hooked me up and threw me off the side of a cliff with a stretcher and a person in it and taught me what I was going to be doing.”

“It was so fun. I got a really unique opportunity I guess,” said Scrutton.

Scrutton said that being a female climbing instructor allows for things to be a little more relatable when it comes to female only classes, though was sure to mention it didn’t take away from the male instructors.

“I’ve definitely heard from women that it’s really cool to see a woman doing it and that kind of inspires the confidence in them, like ‘if she can do this, I can do this,’” said Scrutton.

She had been teaching climbing outside in the summers for a few seasons, but found herself stuck inside all winter, which she hated.

“I was like ‘what can I do outside in the middle of winter?’ It was December 27, 2013 when I started bike couriering,” said Scrutton.

She added that it’s the best job in the world and said it’s answered a question she had been asking herself about being in the teaching field.

“I got to work outside year round which was so perfect,” said Scrutton.

She said that because she started in the middle of winter she already had more respect from the guys on the road as any other rookie, or specifically female rookie, would have received.

Scrutton talked about when she started couriering and how most guys on the road immediately noted her by her gender, less about the guys from her company and more so other guys on the road.

“I think the guys when they got to know me treated me like one of the guys, but when I first got on the road I was the new girl, who’s ‘the girl,’ it wasn’t ‘who’s the new messenger,’ ‘who’s the new bike,’ I was defined by my sexuality,” she said.

She said that with the rise of feminism, there has been a tendency for women to feel like they have to be ‘one of the guys’ to be “equal,” but she feels the opposite.

“Hell no, you just got to be a really good female and you can have power in that,” she said of the “amazing women” she knows in the climbing world who have gotten far for not being ‘one of the guys.’

Ben Gervais is an ex-courier who worked with Scrutton for nearly two years, he said that he was happy she was out there on the streets being kind of a mother-figure for their crew.

“It’s awesome that in such a male dominated industry that she’s out there, kicking ass, making fun of the guys and talking smack,” said Gervais.

“We’re not exactly the cleanest cut of people, plus there’s two girls out of maybe 30 guys on the road downtown,” he added, talking about how the other female courier is nicknamed ‘Grandma Jess.’

Jess Shworan has been couriering for five years and embodies Scrutton’s idea of being a really good female as she’s adorned with pink, sparkly clothes and gear during work hours.

“It’s an honour to share the road with the ladies I get to share it with,” said Shworan, “the guys are great too, we all have a blast.”

All three couriers mentioned that dealing with the public could be the hardest parts of their days, but the women have a one up in that they’re less likely to find trouble with a physical confrontation.

Scrutton mentioned that she’s very aware that couriers break the law countless times throughout the day, but said that it’s not in any attempt to bother anyone else and that she’d like to see more common courtesy in the downtown.

“I’m not out to get you, I’m just trying to do my job, but I don’t come into your office driving a one-tonne car around like an asshole trying to injure you so,” said Scrutton.