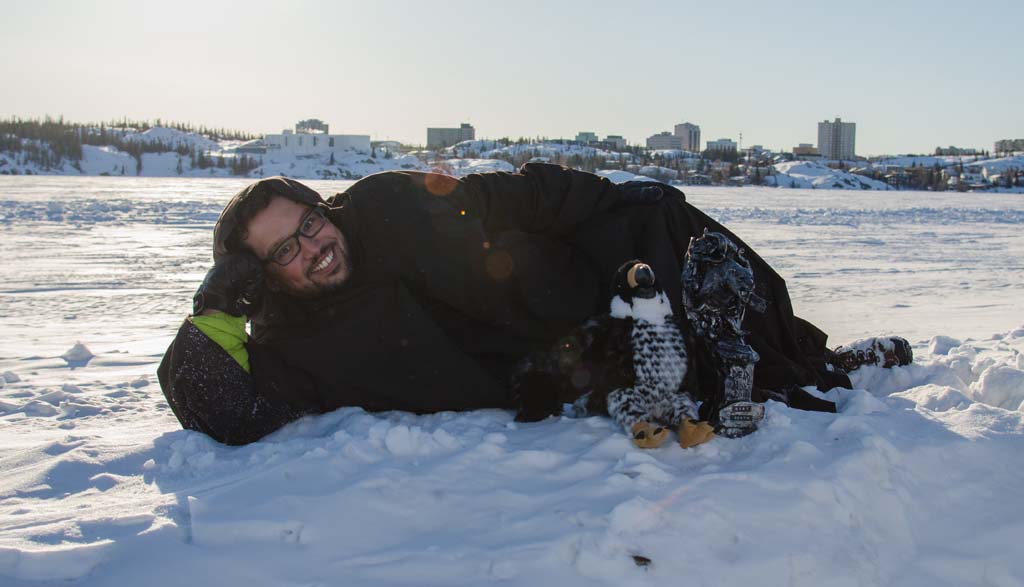 Introduce yourself and the film you worked on:
My name is Matt Voytilla and this year at Dead North I did Granny Longlegs and last year I did John Falcon VS The Scavenger Hunter.

What was your film inspired by?
It came from a conversation I was having with a friend actually. It wasn’t a film that inspired it, it was just thinking about what will be creepy and what would be kind of weird. I was having a conversation with a friend and they mentioned this story that people always tell them when they’re up in the communities about a half-caribou, half-woman who will chase you down if you ignore her and when you’re driving on the ice road or being unsafe.

What’s your favourite memory of making your film?
Packing up was pretty nice because we were on the ice road for eight hours.

What was the biggest challenge you faced making this film?
I accidentally stole a truck for this move, forgot about that. So I needed a truck for my movie, half the movie takes place in the truck but I don’t have a truck so I contacted this friend and they’re like, ‘Oh yeah we’re going to be out at the mines, just borrow our truck, it’s fine.’ So I arrange with them to go to their place and go get the truck. Just before I got there I texted them and said, ‘I’m coming by now and the friend I was borrowing the truck from was like ‘Yeah, I’m not feeling well so I’m gonna go to the tub and just soak for a while but here’s the access code, use it, go in and the truck key is underneath the mirror, grab it, grab the truck – we’re good.’ So I go in, Sure enough, she’s not there or she’s in the bathroom. So I put in the code, walk in, see the keys, and there’s only one pair of truck keys so I  grab those walk outside to the driveway, one truck there – like all right must be it. So I drive off and she was going to the mine the next day and her roommate and her boyfriend were already at the mine and they had another roommate who was staying in town – that’s important later. So a week later, I get a call, I’m still using the truck because there’s still a bunch of stuff in it from the film shoot that I need to drop off to people. I get this call, like ‘Which truck did you take?’ I’m like, ‘What do you mean what truck, there was only one truck when I was there.’ Turns out I took her roommates truck who was really not cool with people taking his truck. So what happened was when I went over just after my friend got into the tub, her other roommate decided she wanted to borrow their truck to go get groceries but she didn’t tell them that she was doing that. So my friend got in the tub, her roommate went downstairs got their truck keys and took their truck just as I was arriving there. I found the only truck keys in the place, took the wrong truck, and afterward, I’m like ‘Shit, I’m so sorry.’ So my friend gives me this guys number to call him, so I call him and I’m like, ‘Yeah man, I’m really sorry like it was totally accidental.’ He’s like, ‘Well if there’s any damage, I’m going to sue you, I’m going to come after you,’ like he was pissed – he was not happy about this at all. At the end of the day like you got a free tank of gas and got the guy’s truck detailed for it. It ended up being the most expensive thing in my movie. It was supposed to be a free truck that I borrowed from my bud.

What’s your favourite thing about the horror/sci-fi genre?
Just the wide expanse of ideas that you can explore in those genres like you can do anything, any idea that comes to you, you can probably fit into sci-fi /fantasy/horror genre and make it work for you.

What’s your favourite thing about Dead North?
Probably the community everyone kind of gets behind it, like it’s a big thing now. So everyone in town knows, you say ‘I’m going to do a movie for Dead North and everyone knows and is like ‘That’s so cool and they all want to chip in and like help out someway, there’s no shortage of help – except for the one guy.

Is it your first year participating in Dead North?
Last year was my first year. Yeah, it was kind of just a whim from the year before. I went to the festival for the first time two years ago – I kind of saw was on display and I was like I think I can do this like this seems achievable having never made a movie, I have no background in filmmaking. I’ve taken courses in screenwriting that’s about it. I never actually made a movie. So yeah, last year I just had this idea like I’m going to do it this year and told some friends and was talking to a few different people – again my friends are my source for story ideas. They’re like ‘You should have a scavenger hunter in it’ and ‘There should be like a monster that’s made of other people and stuff.’ Took those ideas and put it together.

What made you want to participate in Dead North?
Just being interested in film in general. Being interested in like how would I put my own film together and what would it look like, and what’s that process like – to write something and then directed and edited and do the whole thing.

What have you learned from participating in Dead North?
A lot of stuff, making a film is a lot more work than you think it is, but it’s also pretty fun rewarding work so that’s nice. I’ve learned a bunch of little things like how cameras work and exposure and stuff like that.

Anything to add?
Not really, just if you think you might be interested in trying it – just try it.