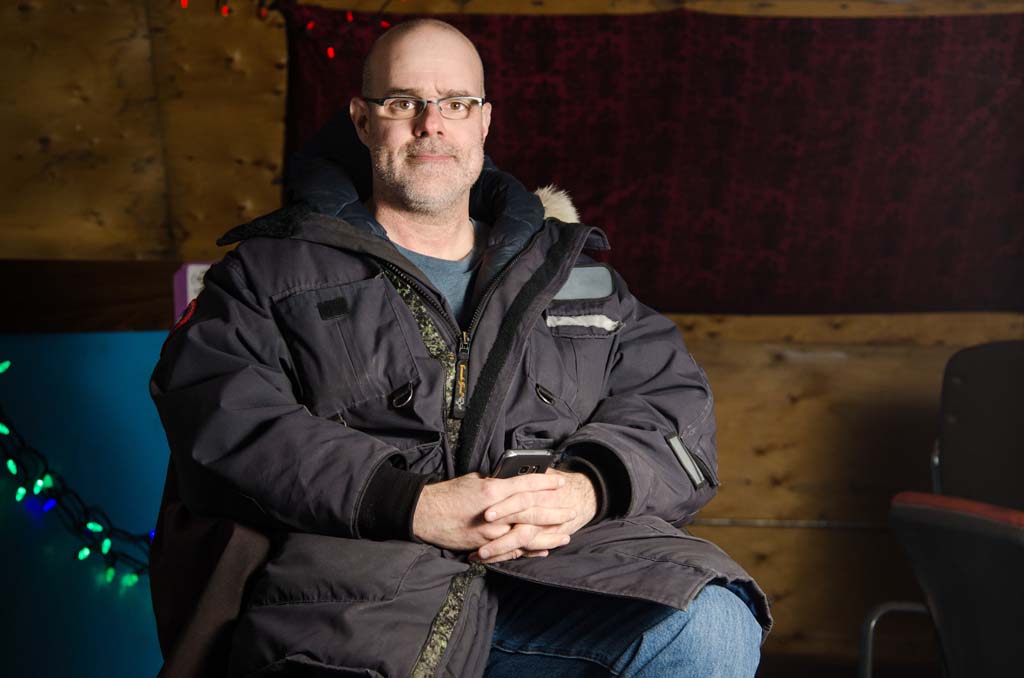 My name is Craig Kovatch, I’m from Hay River and I was the DP on She Keeps Me Warm.

It’s just the shit storm that’s going on in the world right now with the threat of nuclear holocaust and everything else, I think that was Scott’s, the writer and director, what his premise was – that there’s this one nuke that just kind of ended up in a snowbank and somebody finds it. It’s the state of the world right now.

There’s a scene where the main actor has to vomit and in the process of shooting that scene, I think we all almost vomited because it was a little too realistic.

As it is everywhere, it’s just the cold. It’s dealing with the elements. the first day of shooting we were out on the lake for four hours, it was -30. It was a little breezy and that was probably the most challenging because we were out there for four hours straight and you got to get everything in the can.

Myself, I’m not a big horror film fan. Sci-fi is only something that I’ve really come to appreciate the last two to three years. I think it’s adapting it to northern culture and coming up with ways of integrating that, or meshing the two together – northern culture with sci-fi and horror. I think that’s probably most interesting aspects.

Getting to Yellowknife and seeing the other films. That is it and just networking and meeting the other people. It’s not always possible, just because of time restrictions and that, to come up, but that is the pinnacle of the event – the actual screenings.

No, the first year of Dead North was. I hadn’t even heard of Dead North and a couple of guys from Hay River approached me and said ‘there’s this film festival in Yellowknife, do you want to be a part of it?’ I’m like ‘Well what is it?’ ‘A horror film festival,’ ‘Okay, that sounds kind of cool.’ So they show me the script and I’m like ‘Cool, let’s make this happen,’ and we started early on and it kind of grew. I figured like a five-minute film, maybe a 10-minute film and it turned into this 20-minute film. It was a fairly complex story, it was a lot of work but it was a ton of fun and it kind of put us on the map because all the teams were from Yellowknife. Out of four teams that year, three were from Yellowknife and we were the only ones from Hay River. And we had the longest film, we put a lot of work into it. Then the next year we shot a film which we couldn’t enter because there was some controversy regarding the location that we shot in. I think the third year I had a minor part and stuff that I shot. The fourth year I wasn’t there and then I was there for year five and year six. It’s been a great experience.

I went to film school in the early 90s, so shooting has always been in my blood – it’s what I love to do. So as soon as somebody approached me the first year to shoot, I was on board. There was no way I was ever going to say no.

Making do with what you have. Because every year the requirements, the restrictions get tighter and tighter. The first year was make whatever you want, 20 minute film, 30 minute – whatever right. You had your elements, you know, your line to be spoken and your shot that had to appear in the film but each year it gets tighter and tighter. Now we’re down to five minutes, so you have to try to squeeze an entire story into a five-minute project and that’s tough, that’s really hard to do and keep it interesting.

Probably CariBOO! Either that or Dong Gone. Those are the only films I’ve seen so far though because I didn’t get up here for the screening.

I think what Jay and Pablo have done here, they’ve done a tremendous amount of work and it’s nice to see people who have no background in film production get out and make films. It’s a real community event and it’s nice to see everybody participating – whether you’ve been doing films for 20 years or you just said ‘hey let’s spend a week making a film for a festival, I think that’s the best part.