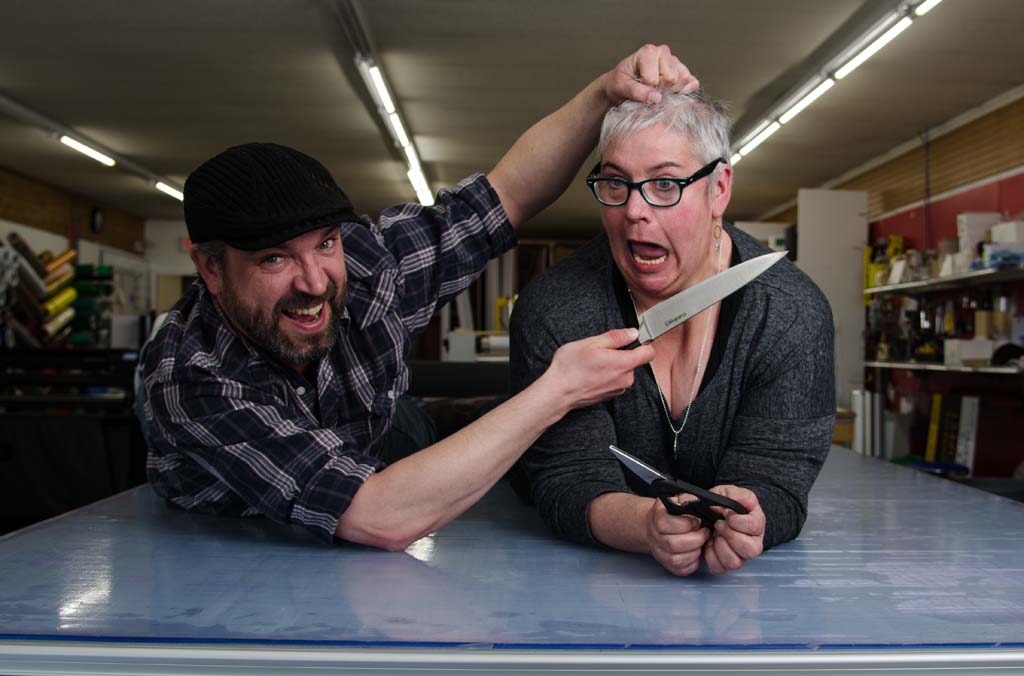 M: My name is Mel Leonard.

M: It was a very dumb idea implemented quickly, by Jay and Pablo, in which I got squished.

M: I ate a pack of powdered gravy I found in the parking lot, passed out and had this vivid dream. I think it was powdered gravy, it could have been drugs… But really I think it was more inspired by looking around and thinking ‘What could we do.’ We wanted the promo – it wasn’t meant to be a proper film, it was just that we wanted to do a funny promotion for the festival itself and that was what was available. I thought ‘Hey, that would be cool, to be killed by that thing.’

J: Yeah, we wanted to make a commercial and we wanted to say, ‘Hey we support Dead North’ and then it turned into its own thing.

M: Pizza that Pablo brought. Just the fact that they did it so readily and so quickly.  We told them the idea and they were just like, ‘Let’s do it.”

J: Jay just happened to come in because we were doing all sorts of printing for Dead North and I said ‘Yeah, we’re going to do a commercial, we’re going to do something to play at the festival if you’re cool with that.’ And he’s like ‘What do you want to do,’ totally Jay serious, which is very rare. And I sorta said, ‘Oh well, Mel has some ideas,’ and he said ‘We’ll shoot it for you, let’s do it on Wednesday at six.’ And I was just like ‘Fuck yeah, we have somebody amazing to shoot it. Because we were going to do it on our iPhones.

M: Also having my kid in it was fun.

J: My inability to act or remember lines whatsoever.

M: I think the biggest challenge was making it look even semi-believable that I was getting crushed by the thing, but they did a great job.

J: Yeah it was them, all them.

M: I just wanted to fake it and pan away, hear me scream, but Jay was having none of that, at all.

J: Jay was like ‘You gotta do this, you gotta do that and da-da-da-da.’ Yeah, thank god those guys were there. We would have made something funny, but they made it believable.

J: The other biggest hurdle we faced was I had gone to the gym just before and I’m completely jello after going to the gym and they’re like ‘Do this, do that,’ and I’m like ‘eeehhhhhh-okay.’

J: Me personally, I stopped watching a lot of horror years ago. It’s hysterical because it all stemmed from watching Blair Witch Project. It scared the living shit out of me. I found it very believable even though so many people found it so laughable. I saw it here, had a weird experience right as the show ended and walking across the street afterward some people scared the crap out of me. Shit freaks me out now, I love science fiction but horror – I just don’t need that. But I love Dead North, because it’s like, it’s rare that I find it scary, but the scary part isn’t the problem. I like that it’s Northern. It’s scary takes on Northern situations. I love it, I love Dead North for that.

M: For me, horror and sci-fi both have a reputation for being big-budget – big, expensive productions – but my favourite ones are the ones that rely on psychological stuff and those don’t cost anything, not that it doesn’t cost anything, it doesn’t have to be makeup and gore and special effects. It can be someone alone in a house and it’s creepy, that’s cool.

J: Jay and Pablo, that’s one, because they’re one. The fact that it’s very specifically Northern. You couldn’t mistake any of those films for being in Edmonton or Vancouver. The fact that it’s films built for that festival, not made in the past four or five years or whatever. And just the whole community, how excited everyone gets around it, going to the shows themselves, there’s a lot of excitement there.

M: I’ve always said that Yellowknife is like Springfield – in the Simpsons – and Dead North Festival is like our Halloween Episode, and everybody in town is in it. It’s great.

J: Participating, yeah. Our film wasn’t juried or anything.

M: No, and Signed. has always participated as a major sponsor since year one, but I’ve always wanted to make one, and it rolls around and I’m like ‘No time.’

J: Mel and I are terrible for overthinking things, like even our little commercials, the best ones have ever done have been done when…

J: “Let’s go make a commercial, we have half an hour,” those have always been our best ones, but when we over-think them, we seem to talk ourselves out of stuff.

M: Always trying to make it more complicated than it needs to be when ad-libbing on the spot works better.

M: I found a pack of powdered gravy in the parking lot… Yeah, I think Janet and I always have tons of ideas that we don’t necessarily have the time or inclination to follow through on and this time we were forced to do so, which is fantastic. I’ve always wanted to do something for it, and we will next year too. We’ll just have to start planning this year.

J: Yeah, and then we’ll talk ourselves out of it and have half an hour to make something. No, but it’s true, I’ve always wanted to be part of one and just not had the time.

M: Not to eat things that you find in the parking lot. The amount of work that goes into it from the filmmaker side. How good they are and how they can take something that would take me a weekend to do and do it in four hours. The value of having experienced videographers and film people can’t be understated.

J: Yeah, it’s like graphic design, you can make your own business card on Vista-fucking-print, pardon my French, but it’s not going to be good. Whereas if you hire somebody professional to do it, oh my god, it’s unparalleled.

M: Easy to do, but hard to master.

M: It’s a toss-up between Armplant and Dong Gone. It scared the willy out of me. But Armplant was really well done, and my kind of humour.

J: Yeah that guy is brilliant. But Dong Gone was unreal. The Armplant guy has a brain that I really like. I still think of another one he did with a chair going across the lake in stop-motion and the sound effects still make me laugh to this day. *cue sound effects*

J: I want to continue to see it grow. I love that there’s a time limit on them now, so they’re short, love that. In the past, having gone to it every year, they’re – editing is the hard part. My nephew works for CBC and he used to say, “You gotta kill the babies,” because I used to make a video every Christmas of the photos from the year, and he’d say ‘You gotta kill your babies,’ because you have to know how to edit. I’m the same way with clients and their photographs. Kill your babies.